Hate Is Such A Strong Word tackled how it feels to be hit with constant prejudice, and the conflict of choosing your family’s culture and that of the country you were born in. Rating: 2/5 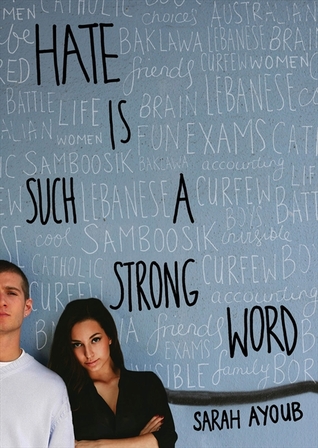 Sophie Kazzi is in Year 12 at an all-Lebanese, all-Catholic school where she is invisible, uncool and bored out of her brain. While she′s grown up surrounded by Lebanese friends, Lebanese neighbours and Lebanese shops, she knows there′s more to life than Samboosik and Baklawa, and she desperately wants to find it.

Unfortunately, her father has antiquated ideas about women, curfews and the Lebanese ′way′. Bad news for Sophie, who was hoping to spend Year 12 fitting in and having fun – not babysitting her four younger siblings, or studying for final exams that will land her in an Accounting course she has no interest in.

When simmering cultural tensions erupt in violence, Sophie must make a choice that will threaten her family, friends and the cultural ties that have protected her all her life.

I’d like to first take a second to thank Dee and the Goodreads group Rated YA-MA for hosting Hate Is Such A Strong Word as a traveling book. I always love seeing everyone’s comments in the margins!

Here’s the deal – the book itself wasn’t bad. I really like the premise of the book and even the way the author went about discussing these issues. However, being cool enough to write a realistic book about prejudice and cultural identity isn’t enough to earn a high rating. My issues with this book are purely based on the annoying characters (their personalities, mostly), how every character spoke the same (poor writing) and other annoyances I would have with any book. We’ll get into that later on, but first, let’s talk about the positives.

First of all, I really enjoyed that the main character loved her culture enough to want to blend both her family’s country and the country she was born in. That’s definitely something that can be relatable to a lot of people, especially people who are the first generation born in a new country. I liked that she was torn between two worlds, and that the narration discussed how hard it was for her to see everyone she cares about be labelled and stereotyped in a negative fashion. Even if that’s not something you’ve experienced, I think it’s something that is important to read to help understand and empathize. It was also really great that they showed how prejudiced the Lebanese were to someone who was mixed. There is always a group that is more oppressed than another, but that doesn’t mean they can’t be prejudiced or racist in their own ways. It showcased a lot of really complex situations in a wonderful way, and for that I was happy.

In fact, that is the only reason I held on to this book as long as I did. Just personality wise, all of the characters were really annoying. They all spoke the same and in basically the same tone. There was a lot of weird insta-love building, even though she tried to frame it as insta-disdain. The writing just actually wasn’t that good, and the main character was so whiny and annoying all the time that she even admitted it several times through the book. Not good. This took me over a month to pull through (actually, closer to two months) because it was so boring. There was never really anything interesting going on, and the whole time I wanted to shake Sophie.

Overall, it’s something I would recommend because of the subject matter presented, but if I were to find another book that tackled those issues I would probably ditch Hate Is Such A Strong Word for good.