Stop by to get all the details on Donna Compositor’s first book in the Diamond Crier series ‘Curse of Stars’ – courtesy of Xpresso Book Tours and Drunk On Pop!

Sabi Perez is the last Diamond Crier, only she doesn’t know it. Not until a crazed ruler from another world comes to collect her priceless tears and won’t take no for an answer.

Living in New York, Sabi’s seen some nasty things, but the lengths to which her captor will go to keep his crown are things found only in the darkest nightmares. Afraid and alone, Sabi finds solace in her cellmate, Anya, and Cabal, a fellow Crier who also has powers, a rare combination that buys his favor from the ruler. Only it’s a favor he doesn’t want.

In a fit of rage, power erupts out of Sabi, the same power Cabal has, and a spark of hope ignites. Together they may have a chance at escape, something no other Crier has done. Except a ruler hellbent on draining them of every last diamond tear isn’t their only hurdle. If they escape they’ll be hunted to the ends of the earth, if they survive the trek to safety. If they stay the ruler will leech them dry. Sabi would rather die trying than lie down and die, even if that means running away into even more danger. 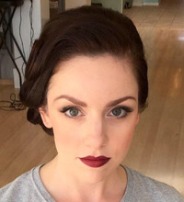 Donna has been writing since she was in the single digits when she first realized she needed to do something about all the thoughts in her head. After a stint with bad poetry she finally found her way to novels, mainly of the young adult fantasy variety. When she’s not cranking out more stories she works a regular 9 to 5, reads anywhere from 2 to 3 books a week, drinks copious amounts of tea, eats way too much, and makes her own beauty products because her skin turns into a sentient hive if she uses anything else. This is mostly because she lives in the desert where the air siphons water clean out of her. She lives with a man named Steve and several quadrupeds: three cats named Renfield, Sam, and Dean; and a MinPin named Malfoy.

Enter the Rafflecopter Giveaway for the chance to win a $20 gift card and some book swag, pictured below!