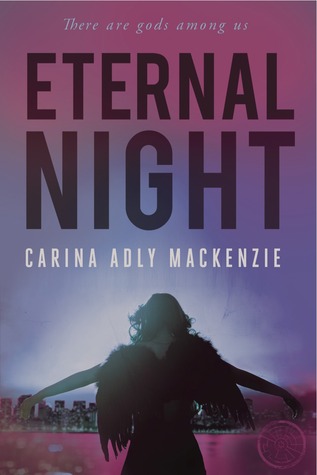 Six young gods are hiding in plain sight among mortals, living secretly in cities across the world. From lavish penthouse soirees to pulsing underground clubs, for them, the party literally never ends. Until now.

On a hot June morning, the body of a beautiful girl is found floating in the rooftop pool of the Jefferson Hotel, her white-ink tattoos revealing the story of a life much longer than seems possible. Only the immortals know the truth: Nadia was the goddess of hope. Now she’s gone, and the world as they know it is ending. The Hudson River has turned blood red. Storms rage overhead. Mania is rapidly spreading across the globe.

It is up to the remaining gods—Lola, Dean, Weston, Mark, Nike and Peitha—to put aside centuries of betrayal and heartbreak, and stop the mysterious source of darkness that is taking over… before the sun sets forever.

Carina Adly MacKenzie, writer for The CW’s hit series “The Originals,” has penned a steamy, romantic, and ultimately redemptive story of forgotten gods, the persistence of hope, and the power of love to save us.

Carina Adly MacKenzie grew up in Greenwich, Connecticut, where she boldly defied the no-reading-at-the-dinner-table rule time and time again. After studying English at the University of Colorado at Boulder, Carina moved to Los Angeles to pursue a writing career. Carina was a television critic and entertainment reporter for Zap2it.com, the Los Angeles Times, and Teen Vogue, among other publications. Currently, she spends her days obsessing over vampire sibling rivalry as a writer for The CW’s new drama, “The Originals.” She loves coffee, Twitter, and her little dog Pacey. Eternal Night is her first novel.