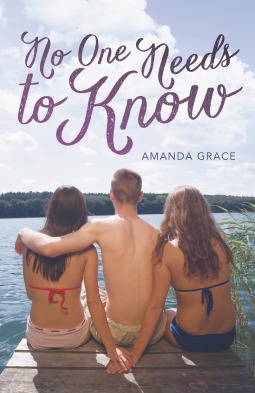 Olivia’s twin brother, Liam, has been her best friend her whole life. But when he starts dating, Olivia is left feeling alone, so she tries to drive away Liam’s girlfriends in an effort to get her best friend back.

But she meets her match in Zoey, Liam’s latest fling. A call-it-like-she-sees-it kind of girl, Zoey sees right through Olivia’s tricks. What starts as verbal sparring between the two changes into something different, however, as they share their deepest insecurities and learn they have a lot in common. Olivia falls for Zoey, believing her brother could never get serious with her. But when Liam confesses that he’s in love with Zoey, Olivia has to decide who deserves happiness more: her brother or herself?

There’s really not much at all to say about No One Needs to Know. It was completely unremarkable and uninteresting. I keep getting really excited about books with LGBTQ characters and then being completely disappointed. While I appreciate the efforts some YA authors are trying to make in adding some diversity to their characters, I would much rather they not even try at all if it’s going to be done half-assed. That’s exactly what I felt was happening in this story. There were too many “sub-plots” (for lack of a better term) and no real actual plot at all. Here we have twins, a boy and a girl, that are incredibly rich and go to private school while living alone in a fancy condo. Boy twin meets random girl at gas station, invites her to fancy condo, and nothing at all is weird about that. Gas station girl and twin girl hate each other – oh and by the way gas station girl caught twin girl in the bathroom with something in her hand. She doesn’t know what it is, yet twin girl acts like it’s the worst thing ever. (This took way too much space in the plot.) Twin girl and gas station girl are partners on a school assignment which makes quite the coincidence that twin boy brought her home. Almost over night twin boy decides he really likes gas station girl so they go to a lake house together with twin girl and all of a sudden twin girl is into gas station girl and they kiss and it’s totally not weird that a) neither of them were ever attracted to each other or any other girl before and b) this girl is now “dating” two twins. Totally normal. Totally.

That’s basically the only point of the book. To “explore” the fact that rich people aren’t assholes and “poor” people aren’t lazy or gross or whatever (literally, there was a scene where rich girl could barely look at gas station girl’s house). Nothing in this book was fully seen through. I felt like the story would have been better had these characters actually discussed and/or explored these new feelings they feel toward each other. I felt like this book had a lot of potential and none of the follow through. The writing wasn’t bad, the characters had the potential of becoming interesting, the love triangle aspect was interesting. It just all stayed very shallow and one-dimensional for me. Perhaps if the only focus was on the bi-sexual love triangle it would have been perfect. Or maybe if the focus was only on these two completely different enemies becoming friends. But attempting to push it all together in such a short book… it just didn’t work.

There were a few continuity errors and typos, but this is an advanced reader’s copy, meaning that the editing process had not been completed prior to sending me a copy to read. I did not hold any of these minor issues against the book when choosing a rating.