Multiple sources are claiming that the megastars have ended their two year relationship this past week, but are the rumors true?

Well, this is sad. Justin Bieber and Selena Gomez have been dating for two years now, but a “source” is claiming the couple broke up last week due to “busy schedules” that were making it “harder and harder for them to get together and maintain their relationship”. Uh huh. Rumors about their demise have been floating around for pretty much the entirety of their relationship, so when my friend Becca started worrying about their breakup recently I completely wrote it off as another crazy rumor. Then tons of news sources like E! News and MTV News and even the Washington Post started “confirming” the breakup…. so what’s really going on?

While I find Justin and Selena to be quite the cute couple, I don’t pay much attention to the status of their relationship. I’ve heard tons of rumors, usually from Beliebers on Twitter or Tumblr claiming they’re broken up whenever the spend a millisecond away from each other. This time, Selena has been off filming the new Wizards of Waverly Place reunion movie (which, sidenote: didn’t it just end? Why do we need a reunion already?) and Justin has been off on his new Believe tour. Biebs took a break to perform at the Victoria’s Secret Fashion Show, and that’s when all hell broke loose. 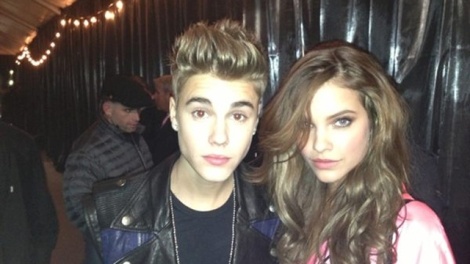 This is such a complicated story, I can’t even. I’m a little fuzzy on the timeline, so I’m going to try and share this with you all to the best of my ability. Okay, so Bieber is at the VS Fashion show to perform, and he brings his friend Alfredo Flores. Lil’ Twist is there too, and reportedly Selena is not there, because she’s off filming her movie. Barbara Palvin is one of the VS models, and she takes a picture with Justin at the event. Totally harmless, right? Except Beliebers and Jelena fans started freaking out that Justin was cheating. Then they all go see Lion King together, and people start freaking out more that they’re going out on dates together and such. Then Lil’ Twist posts a photo of him and Biebs, and Barbara is in the background. AND THEN Selena posts the following tweet, containing the picture Lil’ Twist posted (and deleted later on): 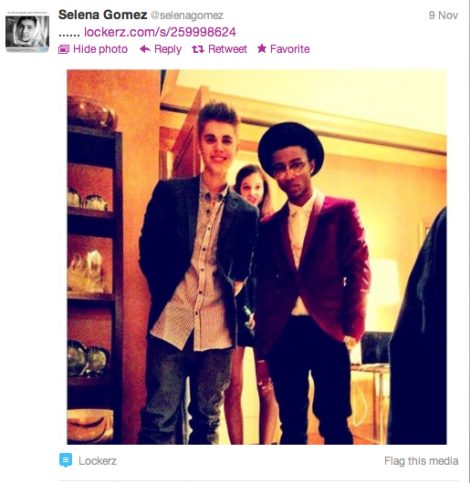 Uh-oh. Immediately after she posted this photo, Justin’s friend Alfredo tweeted this:

He deleted the tweet within the next five minutes after posting this. After seeing the tweets fans started freaking out about the breakup, but do Justin and Selena really seem like the kind of couple who would take to Twitter to start drama? They’re kind of private about their relationship, Selena especially. All of this just made me think that it was a prank, or them being funny because of all the drama surrounding Justin hanging out with Barbara. This had the potential to be a slap in the face to someone (most likely the obsessive fans) because Barbara did a UStream not too long ago telling everyone that she didn’t even really like Selena. Ouch. Right after they all went to Lion King, Barbara took to Twitter to let all of Justin’s fans know that she wasn’t trying to steal him from anyone:

Can we all just take a second to discuss how ridiculous that everyone takes to Twitter to make announcements? Regardless, the next day E! News said a “source” gave them the exclusive news that the couple had called it quits – a week ago. Meaning they were broken up before any of this drama over the VS Fashion Show. Still, things aren’t quite adding up for me. First of all, Selena didn’t retweet Lil’ Twist. That means she had to have saved the photo to her phone and uploaded it to Lockerz herself to tweet it in the first place. Also, how did Barbara know so quickly that the entire fanbase was freaking out about her being with Justin. Also, what are the chances that Alfredo saw Sel’s tweet that quickly to respond and then delete it?

So, here’s my totally unwarranted advice: wait until the reps confirm it. I know I say that I don’t believe anything until E! News makes an announcement about it, but over something like this… no one can really be sure. The American Music Awards are coming up next week, and the two are supposed to be sitting together, so I guess we’ll all know for sure then. If not sooner.