American Horror Story, from the minds of Ryan Murphy and Brad Falchuk, premiered tonight, October 17th, on FX and it was definitely creepy, but was it as good as the first season?

American Horror Story premiered on FX tonight, and I was so excited. I have been waiting what seems like a lifetime for the show to come back, and I have to admit I’m still bitter about the cast/story change for this season. So I’m just going to get this out of the way, I. Miss. Tate. Langdon. Okay, done. I promise…. or I will at least try to be done, okay? It’s the best I can do.

This season of AHS takes place in an asylum during the 1960s. What is creepier than a haunted asylum full of crazy dead people? The show starts out with Adam Levine and Jenna Dewan-Tatum as newlyweds running around the abandoned asylum talking about how they can’t wait to screw each other in the death chute. That sounds like a fabulous idea guys! This is when we’re first introduced to this year’s big bad, Bloody Face. We’ll learn about him later. I’d like to think that I am mature enough at 21 years old to handle various sex scenes and nudity on television, but there was nothing weirder than watching Adam lick his hand to go down on Jenna. Actually, I think it might be weirder talking about them as people and not characters, which is totally my bad because I was so thrown off by the two of them playing sex-crazed newlyweds that I can’t remember their names. Maybe she was Teresa? Who knows. All I know is that Adam got his arm ripped off in the first 5 minutes, and that makes me deeply, deeply sad. I know that he’s just a guest star and not permanent, but I was really hoping he would last a bit longer. Though we still aren’t sure who attacked him, so maybe there’s a (short) future for him yet.

If you’ve seen the first season of AHS you are already acquainted with the flawlessness that is Evan Peters. While I’m still bitter about his character from last season, Tate, not being around this season I’m trying my best to envision him as a new character all together. I really am trying okay? At first I was really upset that I had to watch Evan/Tate/Kit be married to the girl from MTV’s failed Skins (that show was an abomination), and I was even more upset by his giant tighty whities (yeah, he has sex with the girl, this show is all sex and monsters). Then all of a sudden, ALIENS! I shit you not people, literal and actual aliens. LE WTF?! The next time we see Evan/Tate/Kit he’s being dragged inside the asylum and we find out that he’s actually Bloody Face, a murderer that made a mask of his victims skin. Very Texas Chainsaw Massacr. I mean, was anyone surprised? He did play the big bad last season which was Rubber Man. Wow, the writers sure know how to come up with clever names, huh? I’m hoping that Evan/Tate/Kit was just set up as Bloody Face, because it’s way too obvious right now and that doesn’t seem like Ryan Murphy’s MO. I was all, “OH NO MY POOR BB” and then I got totally distracted by Evan’s naked ass all up on my tv screen. Not just once, but twice. Honestly people, are you trying to give us all heart attacks? The more pressing question is whether or not Evan/Tate/Kit actually saw aliens, or if he really is crazy and hallucinated them. And if he really is crazy, does that mean that he really did kill people and become Bloody Face?

Last season left us wary of Jessica Lange’s character, but this season I’m more concerned about Dr. Arthur Arden. He’s that creepy doctor at the asylum that sticks hangers up the patients noses. Sister Jude (Jessica’s character) is a real bitch, and even she doesn’t like/trust the new doctor. He takes our Evan/Tate/Kit and straps him in and keeps his eyes open and tortures him, and that’s enough to make me hate him. He also had poor Sister Mary Eunice (Lily Rabe) bring buckets of *most likely* human flesh out to the food to feed something. What that something is, who knows. Sister Jude also accuses him of lying about the deaths of patients. Overall, homie is a creepy MFer and he reminds me of the doctor from Shutter Island and that weirds me out.

Sister Jude is one creepy ass nun, guys. Just look at that stare. It’s enough to make you piss yourself, and on top of that she rules the asylum with an iron fist. She belittles Sister Mary Eunice, and she treats the patients like crap. We are first introduced to her as she is shaving a patient’s hair for getting frisky with the male patients. She sits down with Lana, a reporter, and calls her out for being atheist. Then she daydreams about ravaging a priest while having dinner with him to discuss the creepy new doctor. THEN when Lana trespasses on the property to find Bloody Face she straps Lana up and tells her that no one will ever come to save her because the only person in her life is her lesbian partner who is too afraid of the world finding out she’s a lesbian because this is the 60s and she is a teacher god dammit! Just like her character Constance from last season, she does seem to have some semblance of a heart underneath those black robes. When Sister Mary Eunice wants to take a beating and calls herself stupid, Sister Jude tells her that she finds her pure and not stupid at all. Then she tells Sister that if she ever calls herself stupid again she’ll get a caning. How sweet. 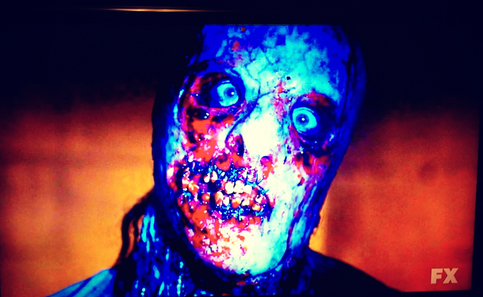 Just as your settling in for the show to end, we get to see the newlywed couple back in modern times again. Jenna‘s character runs off to find help, only to find out that all the doors and windows in the asylum are locked. Oopsie! She runs around and around and around and BAM! There’s Bloody Face live and in person! Can we just stare at him for a second? How creepy and disgusting. How did he/it become like that? Because that doesn’t look like a mask from the skin of murdered victims. That looks like a straight up, nasty zombie. I mean, his lips are gone. I know this image was supposed to scare me, but it didn’t. Not really anyway. It’s almost funny when you stare at it long enough. Then again, I’m the kind of person who loves to be scared and is cursed to live a life that is hard to scare.

American Horror Story airs Wednesdays at 10pm EST on FX. I’m not as into the whole asylum idea this year, and like I said I am still bitter that the story from last season ended so abruptly and without answering my questions. More importantly, I miss Tate. There’s just something not as…. I don’t know what the word is I’m looking for. What I do know is that this episode wasn’t quite as great as what I remember AHS being from last season. I have faith though, and so should you!