Surge On Like A River is a collection of essays from Bharathi Baskar, recently translated by V.Shyamala. Stop in to learn more about the book and read the first chapter! 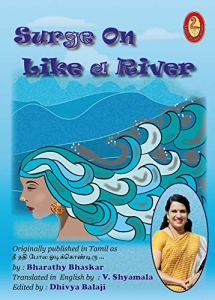 Surge On Like a River is the English translation of the Tamil book titled ‘Nee Nadhi Pola Odikondiru’, originally written by Bharathy Bhaskar, a Chemical Engineer and an MBA, who is a banker by profession. She is also a popular columnist and speaker, and a household name in Tamil homes, thanks to the debates and shows she has spoken in.

The essays are written in a simple, engaging style, and filled with profound insights. These nuggets of wisdom primarily draw from the author’s life experiences and her empathetic observations of the people and situations around her.

This English translation by V. Shyamala captures the lively nature of the original, bringing it to a wider audience with the idea that the readers who do not know Tamil should not miss out on the wonderful collection.

Saro is my friend since school days. One evening, when I ran into her at Mount Road in Chennai, deciding to prolong our happy reunion, we proceeded to the Spencer Plaza to catch up. There, we met my boss, an American.

He noticed me and said ‘Hi’. I responded in kind, and introduced my friend.

Immediately, he complimented Saro, saying, “Your dress is lovely.” She was wearing a magenta-coloured silk sari with a black border. The sole reason for this incident was that the sari was really beautiful, and Americans are usually generous with their compliments.

Even though quite some time had passed since we had met my boss, Saro was visibly uncomfortable. She was not her usual bubbly self, either.  Only after my continuous, repeated insistence and queries of “What happened, Saro?” did she reply.

“When your boss complimented me, I could not even say a simple thanks!”

“Yes. I noticed. You could have thanked him”

“The thing is, I have never been praised so I did not know how to respond…”

That night, it was a long time before I could fall asleep. Is there only ‘one’ Saro who has ‘never been praised?’ There are a thousand Saros, Kamalas , Fatimas, and Stellas amongst us, who yearn for  appreciation.

Apparently, research shows that women’s chromosomal and genetic makeup craves appreciation and acknowledgment, more than men’s genetics do. Must probably be true.

“Darling… How does my new saree look?”

Did the husband even spare a glance at the saree, or did he say so as there was no other quicker way to end the conversation… God only knows!

“There is a difference in the rasam I made today… Did you not notice?”

“Really? For me it tastes the same, as usual.”

Following a new recipe suggested by a friend, boiling tomato and garlic along with lentils, mashing them all together, mixing with the tamarind extract, boiling it evenly before adding freshly crushed cumin and black pepper, and finally tempering with mustard seeds spluttered in ghee… all this effort only to hear ‘it tastes same as usual!’

A new hairstyle from a rare visit to a beauty parlour, a tastefully drawn peacock kolam, a special adai-avial tiffin made after poring over a different recipe from a book, a newly purchased green silk-cotton saree that had attracted at first sight, a reward gotten at the office… would any of this give us complete happiness, if not layered with praise from close family members?

V.Shyamala is a cost accountant, a homemaker, and a writer. She loves to weave stories and is on a continuous quest to seek new and creative ways to teach children. When not writing, reading, or thinking up stories, Shyamala mentors CIMA students, strives to workout, loves tweaking South Indian heritage recipes, and translates Tamil words to English. She is also a member of AWIC (Association of Writers and Illustrators for Children) and volunteers at a local library twice a week.