It’s the most intense dating show on TV today. Find your perfect match and win $1 million dollars, but it’s never that simple on MTV’s Are You The One

For those of you that don’t know, the third season of MTV’s most ambitious social experiment, Are You The One?, just started and it’s crazier than it’s ever been before! On the show 10 girls and 10 guys move in together and they have 10 weeks to find their perfect matches. If they all do then they win $1 MILLION. But if even one person is wrong at the end of 10 weeks, they go home empty-handed. This year there’s an added twist – if they go a single week with a blackout (no matches at all) they lose $250,000 off the top! It’s a strategy game, but would you be able to follow your mind? Or would your heart be calling all the shots?

In case you missed it, or are just now hearing about Are You The One and want to catch up, make sure you watch the first episode and see if you can figure out who the matches are! Don’t forget to play along while you watch – you could win a trip for two to Hawaii!

I’ve been watching the show for the last two years, and it’s always been so fascinating to me how quickly they get attached to people. Sometimes I just want to shake them and remind them it’s just a game! It could be a win-win situation here. Find your perfect match, fall in love, and win $1 million. If you make a connection with someone else, no one is saying you can’t still date them after the show. It’s selfish, in my opinion, to keep the others from winning money just because you think you might like someone after a week or two. Sit down, strategize, figure out the matches and follow your heart straight to the bank! Plus, Amber and Ethan from season one just welcomed a baby! So you definitely know that the game works! 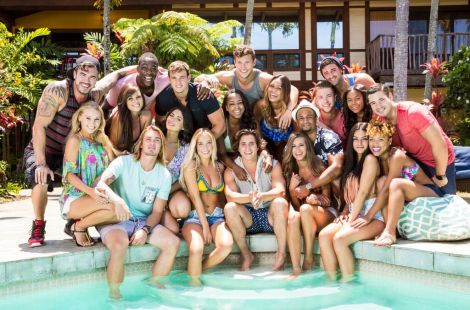 What would you do? Let your heart lead you to a potential match, or use your brain to figure it out first? And if you landed in the truth booth, what would you do if the person you’re into is meant to be with someone else? Make sure you tweet me (@drunkonpop_) and the show (@AreUThe1) and join in the conversation!

One response to “Love the player AND the game! MTV’s ‘Are You The One’ is back!”