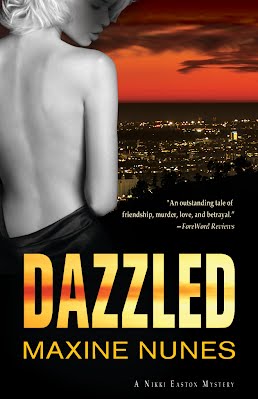 During a brutal L.A. heatwave, four people are murdered in the Hollywood Hills and Nikki Easton’s best friend Darla Ward has disappeared. The police think she might be one of the victims.

No stranger to life’s rough side, Nikki survived the streets as a teenage runaway and now brings that edge to her acting roles. But she has never seen anything like the battered girl on the gurney. Could this really be Darla, her beautiful face so damaged it looks barely human, her path to stardom ended in the county coroner’s morgue.

In her relentless search for the truth, Nikki discovers the hidden side of her friend’s life, laying bare secrets buried before Darla was born, and uncovering widening layers of corruption that reach far beyond Hollywood to the highest levels of government.

What’s real? Darla used to ask me. How do you know what’s real? I never understood the question. But then I didn’t have platinum hair and cheekbones that could cut glass, and no one ever offered to buy me a Rolls if I spent one night naked in his bed. Darla was a brilliant neon sign ﬂashing pure escape. You almost didn’t notice that those lovely green eyes didn’t blaze like the rest of her. She was both main attraction and sad observer at the carnival. Something had damaged her at a very young age. We never talked much about it, but we recognized this in each other from the start. Isn’t that what friendship is?

The week she disappeared was as extreme as she was. Triple-digit heat in late August and wavy layers of smog suffocating the city. By ten in the morning, it was brutal everywhere, and on the sidewalks in front of the homeless shelter, with the sun bouncing off the ﬁlm crew trailers and the odor of unwashed bodies and general decay, it was a very special episode of hell. Beneath an archway, a tall man with a filthy blanket draped over his head rolled his eyes heavenward like a biblical prophet. Or a Star Trek castaway waiting to be beamed up.

In one of those trailers, where air conditioning brought the temperature down to the high nineties, I was being stuffed into a ﬁtted leather jacket two sizes too small. Perspiration had already ruined my makeup and the dark circles under my eyes were starting to show through.

Heat keeping you up, hon? the makeup girl had asked. I’d nodded. Half the truth.

Maxine Nunes is a New Yorker who’s spent most of her life in Los Angeles. She has written and produced for television, and currently writes for several publications including the Los Angeles Times. Her satiric parody of a White House scandal won the Pen USA West International Imitation Hemingway Competition.