Kendall and Kylie Jenner have teamed up with Maya Sloan to premiere their debut novel about a dystopian society and two girls that could change it all. Rating: 3.5/5 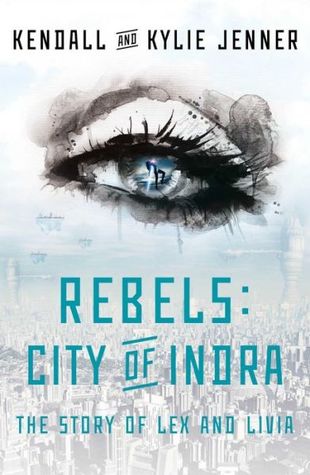 In a world of the far future, the great city of Indra has two faces: a beautiful paradise floating high in the sky, and a nightmare world of poverty carved into tunnels beneath the surface of the earth.

Kendall and Kylie Jenner, the youngest sisters in the Kardashian dynasty, have written a gripping tale of air, fire, and a bond of blood.

Before we get into the nitty gritty of the review, we need to discuss something. I was walking through Target last week when I saw this book sitting by itself on a shelf. The cover is what drew me in. I thought it was gorgeous  (I have a thing for this color blue and I was drawn in by the eye) and then I saw the “authors” were Kendall and Kylie Jenner. I texted my best friend a picture of the cover saying, “Look how pretty the Jenner girls’ book is!!” and she promptly said “Yeah but it probably sucks”. Everyone on Goodreads had the same thing to say. “Well clearly since it has two Kardashian kids names on it then it must be shit. And obviously they didn’t actually write it! They’re just trying to take credit!!”. I was so royally pissed off. I mean, sure. There was a good chance that this book wouldn’t be great. There was also a 99.9% chance that the book was written by a ghostwriter (which it was). But to judge the book so harshly without actually reading it is just so morally wrong in my opinion. Yes, it sucks that the Jenners are getting credit for an idea they may or may not have even come up with. But by rating it a 1 without reading it…. by shit talking it without giving it a chance…. you’re not doing anything negative to the Jenner girls, you’re doing it to the people that actually wrote the book. By putting the Jenners on the book, perhaps this was a way for a great author to make a living writing? It’s also very possible that the girls did have more to do with the book than just the idea. So in that moment, as I was walking through the Target aisles and reading “reviews” of the book on my Goodreads app, I decided I was going to buy the book. I was going to buy the book and I was going to read it and provide an honest and unbiased review because I have no time for bitches that are going to rate something poorly just because of a name on the cover, and no one else should tolerate that shit either.

Now, for that unbiased review….. I liked it. I genuinely liked the book, the characters, the setting. I didn’t love it, and it wasn’t the best book I’ve ever read. In fact, I would say it was just above mediocre. It was slow in the beginning, and I found myself being bored and slightly confused. This is dual perspective, which we all know I can’t stand, and it was jumping around a lot. I felt like the authors (the real author, Maya Sloan) were trying too hard to write well. It was like she knew/thought she needed to overcompensate for the fact that a celebrity was going to be publishing it. The first few chapters were a little hard to get through, but toward the middle of the book I realized I was hooked. I was invested in the characters and what would happen to them. There was a love triangle, and one line of that triangle was insta-love which was annoying. But I was pulling for the other side of the triangle, the one where the two characters basically grew up together. Then there were some predictable moments, but there were also several twists that I did not at all see coming.

Other than a few mishaps here and there, the book was really great. Yes, there were a lot of aspects of it that seemed “borrowed” from other popular young adult series, but I feel like they were utilized in a way that progressed the story. A few times along the way I thought of other series, but not enough that it was a bad thing. A lot of books remind me of other books. I really liked the message it was sending to girls. Here was this rich, beautiful young girl that could have any boy she wanted. All she had to do was smile pretty and dress well and speak when she was spoken too, but that wasn’t enough for Livia Cosmo. She wanted to ride her horse and think for herself. She liked to get her feet dirty and she knew how to kick ass with a sword. She was bored with being shallow and vapid. She wasn’t really like that, and she fought against it, and it made me love her. The other character, Lex, was an orphan. Deemed unworthy by society and told that she would fail. She fought, she fought against oppression and she fought to succeed. She did not let where she came from dictate where she was going.

I felt like the story was intriguing. I wanted to learn more about how the world had become like this, and I am looking forward to the sequel. Like I said, it was not the best book I’ve ever read, but I enjoyed it nonetheless. I had no problems getting through it, and it does not deserve NEARLY the amount of shit it is receiving from people on the Internet.

UPDATE: ACCORDING TO CRUSHABLE/LA TIMES–

“Along with their creative director Elizabeth Killmond-Roman, the Jenners created a broad two-page outline describing the futuristic tale about two girls with superpowers who are secretly twins. Sloan was hired to execute that vision, using Kendall and Kylie as inspiration for the book’s protagonists. The sisters took her along with them to New York Fashion Week and let her hang in their hotel room while they texted their friends.”

I stand by what I say. And I stand by Maya’s take on it as well, “I’ve learned to check my ego. Ego will get you a teaching job in Iowa grading freshman comp papers, or a 9-to-5 editing promotional material where you want to slit your wrists. I’m writing for a living, and it’s a gift to be a working writer.”