Check out Scotch Wichmann’s new comedy novel “Two Performance Artists Kidnap Their Boss And Do Things With Him”. 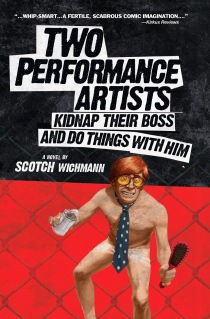 Hank and Larry are performance artists in San Francisco’s
underground performance art scene. But when the mind-numbing grind of their
corporate jobs drives them over the edge, they plot the ultimate revenge: to
kidnap their company’s billionaire CEO and brainwash him into becoming a manic
performance artist.
Fueled by the author’s performance art background, Two
Performance Artists is a screwball dark comedy about best friends determined to
tackle the American Dream with fish guts, duct tape, and a sticky AK-47.
Two Performance Artists is the first performance art novel
by a working performance artist, tackling themes like fame, narcissism, and
criticism, which are all timely in our “watch me!” age of reality TV,
Instagram, and YouTube.
A first-round finalist in the 2013 Amazon Breakthrough Novel
Contest, the book straddles several genres—it’s a madcap adventure, a pulpy
action novel, a caper comedy, and a “bromance” for sure. One early
reviewer called it “Office Space meets Fear and Loathing in Las Vegas meets
Jackass.”
PURCHASE
Amazon – Kindle | Amazon – Paperback |Barnes & Noble – Nook
Barnes & Noble – Paperback | Apple – iPad | Kobo
ABOUT SCOTCH WICHMANN
Performance artist SCOTCH WICHMANN was launched into the
American art scene 23 years

ago with his debut piece, SNORTING MOUSE FUR, and
he’s been going strong ever since. Nominated with his performance troupe for
Best Comedy and Best Stunt at the 2013 Hollywood Fringe Festival, his work has
become known for its surrealism, physical endurance, and Dadaist comedy at
galleries and fringe festivals around the world.