Miranda Richmond Mouillot’s historical memoir “A Fifty-Year Silence” is a beautifully told tale of love, war, and a ruined house in France – told by a loving Granddaughter. Rating: 4.5/5 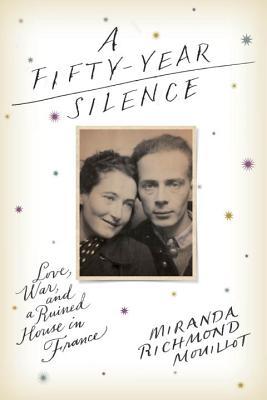 In 1948, after surviving World War II by escaping Nazi-occupied France for refugee camps in Switzerland, the author’s grandparents, Anna and Armand, bought an old stone house in a remote, picturesque village in the South of France. Five years later, Anna packed her bags and walked out on Armand, taking the typewriter and their children. Aside from one brief encounter, the two never saw or spoke to each other again, never remarried, and never revealed what had divided them forever.

A Fifty-Year Silence is the deeply involving account of Miranda Richmond Mouillot’s journey to find out what happened between her grandmother, a physician, and her grandfather, an interpreter at the Nuremberg Trials, who refused to utter his wife’s name aloud after she left him. To discover the roots of their embittered and entrenched silence, Miranda abandons her plans for the future and moves to their stone house, now a crumbling ruin; immerses herself in letters, archival materials, and secondary sources; and teases stories out of her reticent, and declining, grandparents. As she reconstructs how Anna and Armand braved overwhelming odds and how the knowledge her grandfather acquired at Nuremberg destroyed their relationship, Miranda wrestles with the legacy of trauma, the burden of history, and the complexities of memory. She also finds herself learning how not only to survive but to thrive – making a home in the village and falling in love.

I want to start off by saying that this is not something that I would typically read, nor is it something I would typically pick for myself. I almost never read non-fiction, but I was really drawn into this book while scrolling through Blogging For Books. The premise seemed intriguing – a married couple divorces and never speak again for 50 years despite having children? While it had the makings for some good drama, I was pleasantly surprised at just how deep the story went, and I was thoroughly enchanted with Miranda Richmond Mouillot and her desire to leave a lasting imprint of her grandparent’s stories.

It is truly amazing how much Armand (Miranda’s Grandfather) and Anna (Miranda’s Grandmother) had to deal with in their lives. I think it’s easy for us to forget just how recent the Holocaust – a traumatic, shameful event – occurred. My grandparents were also alive during World War II, and my Grandfather fought in Italy as a member of the 10th Mountain Division. The Holocaust is not the distant past. This is something still very fresh, and when you are able to see with that perspective it changes everything. Finding out about what tore Armand and Anna’s marriage apart was interesting, but it was made that much more interesting after learning about all the hardships they sourrwvived. How could two people who had been through so much together, and so many similar experiences separately, not be able to work things out? Was there too much tragedy surrounding them that they’re only way to live in the light was to leave each other and all they went through in the dark? Even better, for me, was that neither of them seemed interested in letting those horrific events define them. You cannot blame Miranda for spending a decade of her life wanting to encapsulate their lives. Post-war they both truly lived, which is a wonderful lesson that anyone could learn.

I have been close with both sets of grandparents, and I am very lucky that my paternal grandparents are still alive. I’m especially close with my paternal Grandmother, and reading about Armand’s deteriorating memory hit very close to home, as my Grandmother has Alzheimer’s. I was moved to tears during the end of A Fifty-Year Silence, and am so happy for Miranda that she was able to do what she had always wanted to do. It might have taken 10 years, but it brought so much into her life, and it memorialized the incredible journey both Armand and Anna traveled.

This is a story, and it should be read in the same way as you would listen to someone tell you a story. It is a granddaughter’s retelling of her grandparent’s lives. It is not written to be a textbook example of someone’s experience. Some harsh reviews have berated Miranda for incorporating her own life into this book, but how could she not? She did not have all of the answers from her Grandparents. This is simply a girl writing her experience attempting to piece together the past. I think she did a wonderful job, and she is a fantastic storyteller.

PLEASE NOTE: I received a free copy of this book from Blogging For Books in exchange for an honest review. All opinions held within this review are my own thoughts and feelings and do not reflect upon anyone else.