Identity Theft by Anna Davies is a complete ripoff of basically every other book ever and I hated it. Rating: 1/5 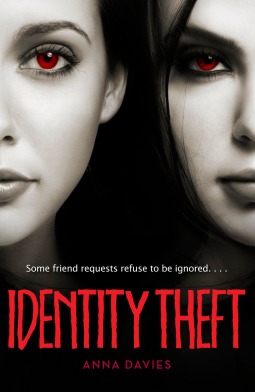 Hayley is going to have the best year ever. After years of careful planning, she’s ready to serve as student council president AND editor-in-chief of the newspaper. Ivy League, here she comes!

However, just before student council elections, someone creates a fake facebook profile for Hayley and starts posting inappropriate photos and incriminating updates. It must be the work of a highly skilled Photoshopper, but the attention to detail is scary. The situation escalates until Hayley’s mother reveals some shocking information. Hayley isn’t an only child: She has a twin sister who was adopted by a different family. And that’s not all. Soon, Hayley discovers that her long-lost sister isn’t just playing a prank–she’s plotting to take over Hayley’s life . . . by any means necessary.

This was the worst book I’ver read this year. In fact, if it wasn’t for my Rated YA-MA reading challenge, I would have marked this as DNF around 25% through. Just absolutely horrendous for so many reasons, which we’ll get into. But first: I took a sentence out of the summary to make note of. The summary on Goodreads added this sentence, “The embarrassing photos of “Hayley” in her bathing suit reveal a birthmark on her back–a birth mark Hayley has never shown in public. . . .” This is something that did not even happen in the book. The summary also talks about a secret that Haley’s mom reveals – except she didn’t. The summary involves plot points that don’t even happen, so there’s just one tell that the contents of the book sucked.

This had a lot of potential. I was intrigued by the social media aspect of it and the fact it was part of a series of sorts with other social media related stories. Identity Theft/Catfishing/etc is something that is happening a lot on social media right now and had this been done well it could have been really enjoyable. For one, all of the characters sucked. The main character, Haley, (so unmemorable I had to look back to find her name) is supposed to be one of the smartest girls in school and yet throughout the entire story she acts like the dumbest person I have ever read about. Her, and all of the other characters, we all equally dumb and one-dimensional. Hayley kept blinding blaming people for things with no reason. Then re-made friends with people that have hated her for years. She just let things happen to her and apparently had never heard of the fucking screenshot button. Some characters and “plot points” were introduced with absolute no meaning. We could have gotten to the ending without going through some of these loops at all.

Which speaking about the ending, had the first 3/4 of the book been better the ending almost could have gotten this book a 1.5 or even 2 star rating. The twin that was introduced ended up being clever and sneaky but then all of a sudden the ending happened that made everything else a complete cop out. I am attempting to stay spoiler free here, but it really was one of the most wasted endings in a book. I don’t think I can come up with a more wasteful ending, I really can’t. Then major plot points, things that mattered so much to the main character were never addressed again. What could have been completely creepy and interesting was dumbed down to the point that it was irrelevant. Totally disappointing.

With all of that said, the entire premise of Identity Theft was completely ripped off of other books, specifically Pretty Little Liars. The way the main character was – totally Spencer Hastings. The twin angle is something that occurred in the PLL books, and even the whole stalking and putting people in danger. The way people acted, the way they talked, even things that the characters did – total and complete ripoffs. I would go so far as to say that this book HAS to be some sort of plagiarism. There’s nothing original about it at all. It’s one thing to borrow aspects of other books, but this was extreme and it wasn’t even good. I am very wary of reading the other Point Horror book that I received as an ARC. Blah.